Time for an exclusive excerpt from my next book, Falling for the Right Brother, book 1 in the Saved by the Blog series.

This just in, fair readers! That gorgeous new woman about town is none other than formerly frumpy Elle Owens. Apparently Miss Elle has been spotted with yummy contractor Cam Dumont…but we thought her heart belonged to his little brother. Are Cam and Elle a new couple? If this is love, let’s hope she’s picked the right brother. The Bayside Blogger will keep you posted.

He liked being around Elle. Most women wanted to talk about their feelings. Not that there was anything wrong with that when it was needed. But there was a lot to be said for enjoying a quiet moment.

Plus, she could hold her own with him.

And she could cook.

And she was gorgeous.

Sneaking a glance at her, he felt his heart practically stop. She’d let her hair out of its ponytail. Now the wind was moving through it, light brown strands flying around her face. The setting sun cast an aura over her that highlighted her smooth skin. Awash in light, with a dreamy expression on her face, she looked serene, calm. Exquisite.

Exquisite? Ah, hell. He liked her.

She turned her head at his oath. “What was that?” she asked, an amused expression on her face.

He couldn’t like her. Not if she had any feelings for his brother. That wouldn’t be right.

All he wanted to do was kiss her. With his body tensed and primed at her nearness, he desperately wanted to draw her to him. He wanted those lips on his, those arms around him.

He met her curious gaze. Why couldn’t she be weird or crazy or just not his type?

“What are you thinking?” she wondered aloud.

“Do you still have feelings for my brother?” he blurted. Idiot. Her face fell and then he cursed himself for that. “Sorry, it’s none of my business.”

“You were in the same class.” It sounded like an accusation.

“That doesn’t mean anything.,” she said slowly, taking a step toward him. “Dinner last night was the longest we’ve ever talked.”

It hit Cam then, crystal clear. Jealousy over that dinner was what had been bothering him all day. What had kept him awake the night before.

Feeling irritated even now, he wanted to pace. But she was standing so close. He could smell her perfume, a flowery scent that mixed with the aromas from the kitchen. Shouldn’t go together, but to him, it was intoxicating.

“Look, Elle, just tell me, once and for all, do you have feelings for my brother?”

“No,” she practically screamed. “And for the record, I would never go after someone who was taken.”

I hope you enjoyed that little sneak peek into Falling for the Right Brother, which you can pre-order now.

You may have noticed that I haven’t had any new books out in 2017. That’s because I’ve been waiting until now to share my newest release. I’m thrilled to introduce a brand new series I’m writing for Harlequin Special Edition called…Saved by the Blog. Initiate glitter toss.

Book 1 is called Falling for the Right Brother and the release date is right around the corner. Print book (that’s right, this one comes out in paperback) is May 23 and the e-book is available June 1. Isn’t this cover gorgeous!

I describe this first book as a combination of Gossip Girl and Sabrina. But set in Virginia on the Chesapeake Bay. It’s fabulous and I hope everyone loves reading it as much as I loved writing it.

Here are the other books in the Saved by the Blog series:

Bidding on the Bachelor, October 2017
Smitten with the Boss, January 2018

Want more details? Check out the blurb and the buy links below. Stay tuned for a sneak peek of Falling for the Right Brother next week. Until then, happy reading….

Saved by the blog!

This just in, fair readers! Chic and stunning, that gorgeous new woman about town is none other than our very own little Ellie—now Elle—Owens. She’s a far cry from the frumpy, bookish student we used to know, but then, living in Italy will do that to a girl! Still, this blogger can’t forget the infamous video that caused her to leave!

Apparently Miss Elle has been spotted with yummy contractor Cam Dumont…but we thought her heart belonged to his little brother. Are Cam and Elle a new couple? They were seen cooling their passions in the bay…in April! If this is love, let’s hope she’s swimming with the right brother. The Bayside Blogger will keep you posted.

The Fourth of July is my favorite holiday. That’s why I set the very first book I ever published, FLIRTING WITH THE COMPETITION, around it. Why do I love this holiday so much?

Plus, I live in the DC-area and I feel like that gives the holiday a little extra sparkle. As long as we don’t go the way of the movie Independence Day, we should be good to go.

So, I wish you all a very happy and safe Fourth of July weekend full of great food, sparkles, and relaxation. For those of you looking for a short, fun, flirty read while you’re next to the pool or on the beach, please check out my award-winning novella, FLIRTING WITH THE COMPETITION, only 99 cents! 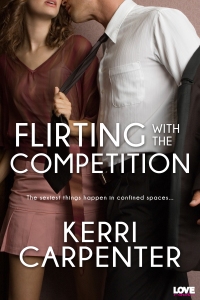 Flirting with the Competition

Under normal circumstances, Whitney March might have appreciated sharing an elevator with a ridiculously attractive and clearly wealthy guy. Even enjoyed it. But when her companion turns out to be the man who almost ran her over in parking garage moments earlier? Nope and nope. Besides, she’s on her way to a job interview at a prestigious law firm, and she needs to stay focused. Not staring at the rich and sexy jerk.

Then the elevator comes to an abrupt stop. They’re stuck.

Jordan Campbell has every intention of acing the interview for his dream job, and he’s not about to let anything stop him. Not even the sexy, capable, and fiery woman who turns out to be his main competitor he’s trapped with. The only thing they have in common is determination to get the job…and an escalating attraction. And it’s only a matter of time before these competitors indulge in a very sexy little connection between floors.